You are currently browsing the Christian Heilmann blog archives for September, 2005.

Search the web and help charities

Are you scrounging ebay or price comparison sites daily for deals? If so, give rectifi a go. It is a search engine that donates 92% (no idea how they came up with that number) of their advertising income to charities.

Doesn’t cost you anything, and it is a nice idea.

Posted in General, Odds & Ends | Comments Off on Search the web and help charities

The making of the CSS Table Gallery

I got some emails by people asking me how the script powering the css table gallery works. Instead of answering each and every email, please refer to the following if you are also curious:

It is by far not a “best of breed” piece of scripting, but hey, it gets the job done.

Posted in Experiments, General, My Articles, Tips & Tricks | Comments Off on The making of the CSS Table Gallery

It has rabbits! It is about the XBOX!

Why is it that every time game console crazy friends send me links about happenings I stand there confused as heck?

http://www.origenxbox360.net/, probably brought to you by the same designers as the XBOX 360 main site (which was featured on the daily sucker) is once again a high tech flash site that should encourage interactivity, but I honestly don’t get what they want me to do and why I should try to find out what it is about…

Other companies are more subtle, and not at all less impressive: IKEA’s 360 degree kitchen portfolio got me stunned and I had a lot of fun using it.

Maybe if usability militia members and arty designers would stop bashing each others’ work and learn from another we could sell Flash as a rich user interface, and not only as a pretty animation toy.

Posted in General | Comments Off on It has rabbits! It is about the XBOX!

Some may remember that I reported on the unfortunate logo of an oriental school some time ago. I am also still puzzled what the Olympic Games 2004 in Athens mascot is, but what really got me was a new German creation: 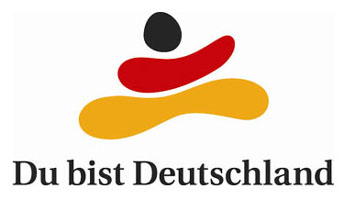 This logo, chosen from supposedly hundreds of creations by top design agencies should encourage me to feel good to be German. How can something resembling either

should inspire me to feel good about my nationality?

Some month ago a colleague of mine considered it a good plan to start an own company in a market that is very competitive and has a lot of shady characters.

The project was planned as low-budget as possible: Hand coded HTML, no database functionality, no CMS and just a few pages to do. Nothing fancy.

He hired a designer to come up with a corporate identity and he did a logo and went through some Corbis CDs to find pictures of shiny happy successful people and mood-selling baby pictures.

It was my task then to deliver the web site. Of course the money for the designer ran out when it came to developing a style guide for type and screen design, which is why I made up the CSS on the spot while converting the five word documents the original site was planned for.

The site was a flexible, easy to resize and accessible xhtml + CSS solution and my pride and joy, as I wanted to make it an example of how we can deliver and create nice sites quickly. I even promoted it on here and in some forums to help it get the first hits and maybe a fresh perspective from other people (being the developer you are always too close to the project).
Now, some minor changes later the colleague wanted to get a more prominent contact facility, which was easily implemented. Then the millions of clients didn’t come. END_OF_DOCUMENT_TOKEN_TO_BE_REPLACED