You are currently browsing the Christian Heilmann blog archives for December, 2020.

Back to basics: adding a playback speed control to an audio player

Currently I am publishing the new Developer Advocacy Handbook chapter by chapter and I also started recording audio versions of each chapter. A common request of people is to be able to control the speed of a audio/video recording. Luckily enough, using basic HTML5 and JavaScript, this is not that hard to achieve, so let’s do it.

You can see and hear the result in the following video:

You can check the final version on Codepen

See the Pen
Audio with speed control by Christian Heilmann (@codepo8)
on CodePen.

In this case, using the audio element with a controls attribute already gives us a play button, a scrubber, time display, volume and an overflow menu with download option. For the speed control, we need a slider with a label to keep it accessible and a span element to show the current value of the playback speed. The range control is good for this as it also gives us keyboard access and allows us to limit the speeds we want to allow. In this case, from half speed to four times the speed.

Let’s only go into basic CSS for styling here:

We give the control a container element and set it to a max-width of 30em. We display the audio element as block and make it use up all the available space. We give the new speed control a bit of padding and use flexbox to lay it out.

The last bit is to use JavaScript to create the rest of the functionality:

One thing that is missing is that users may want to have their favourite speed stored so they don’t have to set it again chapter by chapter. To do this, we can use localStorage, set the playbackRate and value when we load the document and store it when the slider changed.

And that’s it! An audio playback control with playback speed option.

Posted in General | Comments Off on Back to basics: adding a playback speed control to an audio player

Eleven years ago I wrote the Developer Evangelism Handbook and since then it helped a lot of of people start a career in Developer Relations. Now a publisher approached me if they could do a print version. The negotiations are still underway, but I was sure that it is not a good plan to release the book in the state it is in. So I spent the last few days cleaning up. I edited the chapters and removed outdated examples or links to defunct products. And I added new content that is more relevant to today’s world of developer advocacy. I will release chapters bit by bit over the next weeks. Once all is live I will open the GitHub repository for contribution and feedback.

For now, head over to https://developer-advocacy.com and start with chapter one and two. 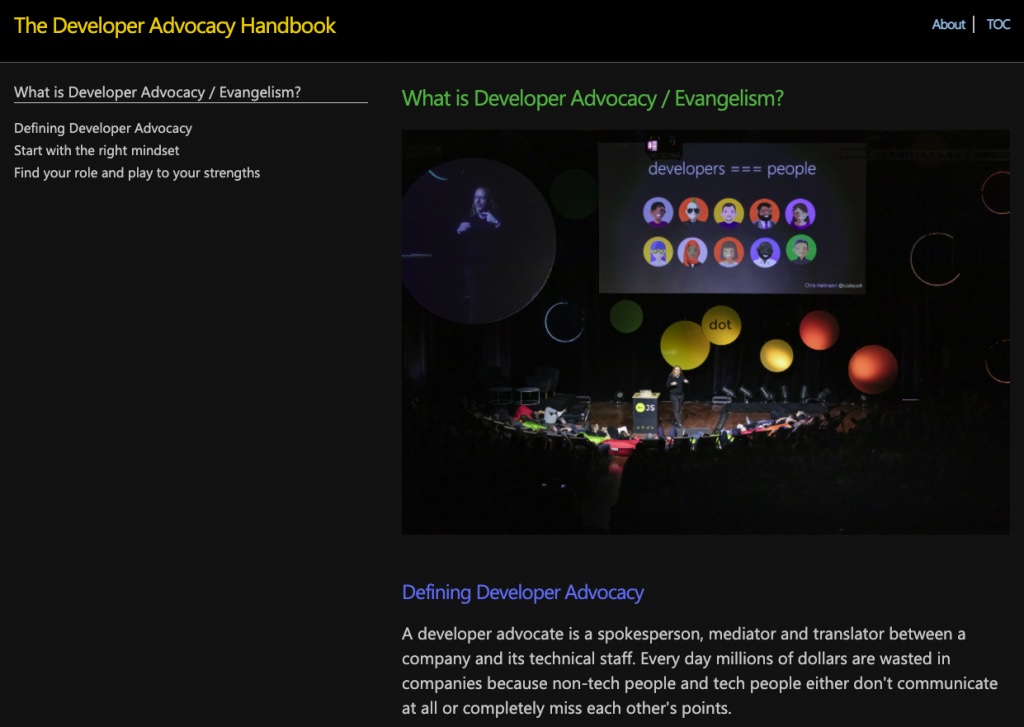 You can see the whole Table of Contents and the chapters will light up as they become available.

I wrote the new book in Markdown and I am using GitHub Pages to publish and host it. It was a fun exercise to learn Jekyll and I am still in the middle of it. The book has an automatic dark/light theme detection and should be nice to read across all kind of form factors. Once done, I will also add a serviceworker and such to make the book installable. I am also considering generating an ebook version if you are interested.

Quick Tip: How to capture and replace newlines in liquid for Jekyll/GitHub Pages

As part of the re-write of The Developer Advocacy Handbook I needed to have blockquotes with different classes.

With GitHub Pages markdown you can do that using the > notation:

> **Fact:** There are no bad students or a bad audience -- only bad workshops and talks. Your mood, dedication and enthusiasm do become those of the audience -- if you are not happy, they won\'t be happy.

The problem was that I couldn’t add CSS classes to the blockquote elements so I can show them in different styles. I wanted four of them: example, fact, warning and tip.

The good news is that even without any styling using the strong name should make it obvious. But as there is no text “contains” selector in CSS I couldn’t rely on that to change the blockquote element.

The first thing I thought was to use JavaScript to apply the classes, which is pretty straight forward:

This, however, felt dirty and I wanted to use the system itself to do that task.

So I wrote a liquid include to convert the HTML before rendering. In my layout template, this works by replacing the {{ content }} with {% include blockquotes.html html=content %}.

In the blockquotes.html, I thought it’d be easy to do a search and replace. Alas, there is the issue that liquid only does string replacement and doesn’t know any regular expressions.

The HTML generated from the markdown has a line-break in it:

This is where it didn’t get fun. The replace filter doesn’t allow you to concatenate strings and doesn’t know the concept of n. So, I tried to use the newline_to_br together with strip_newlines filters and then replace the br but it was messy.

Turns out, the main trick was to capture a newline in liquid and assemble the string to replace using that one.

This works fine. Seems superfluous, but it is a way. It might be that there is a much simpler way as I am new to this world, having used PHP before the build the old version of the book. Got a better option? Tell me :)

Posted in General | Comments Off on Quick Tip: How to capture and replace newlines in liquid for Jekyll/GitHub Pages 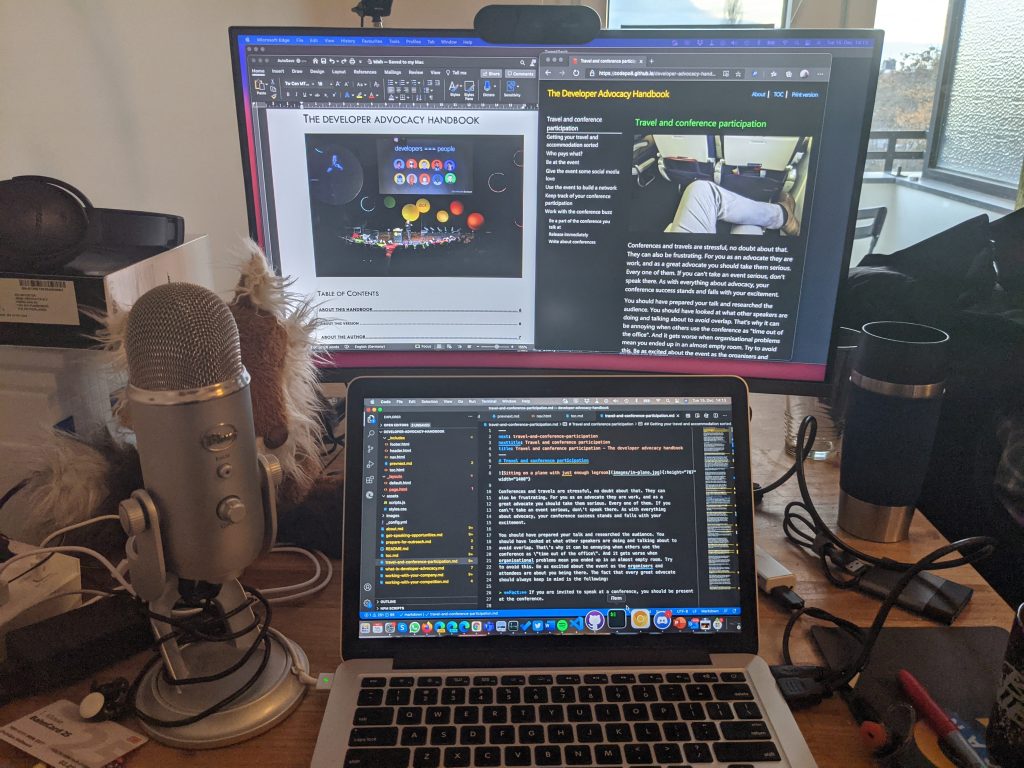 Eleven years ago I wrote the Developer Evangelism Handbook .Last month I was approached by a publisher who is interested to print it in another language. Whilst flattered, I also couldn’t let that happen as there are parts of the book that are quaintly outdated now. Some of the products I promote aren’t available any longer and there are big differences in the way we use social media and the web now compared to 2009.

So I spent a few evenings polishing the book, removing a lot of outdated material and adding new things that are more relevant now.

I added materials about virtual conference participation, code hosting, recording your own videos and screencasts, and incorporated some of the posts and materials I created since first publication. Currently it is at roughly 40000 words and the letter sized Word Doc would me 85 pages.

For now, I will publish the book online again, chapter by chapter and also consider creating some ebooks for those who prefer using readers. There’s a dark and light theme and it will work across all resolutions and platforms. I’m using jekyll/eleventy with GitHub pages and learn a few new things on the way.

Here’s the new table of contents: 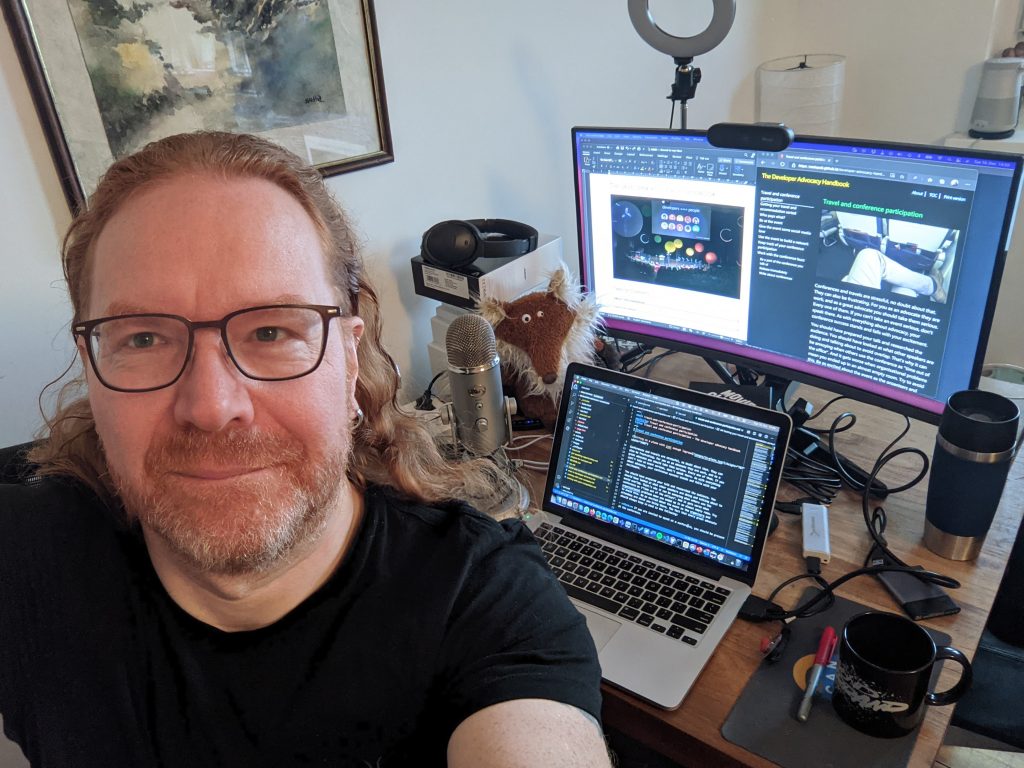 Until then, I hope you have a great time and take some time off!

To celebrate the 25th birthday of our favourite strange and wonderful language for the web, Pluralsight has ramped up the JavaScript.com domain and offers 25 free courses over the month of December. Click the following overview to sign up for free and see them. 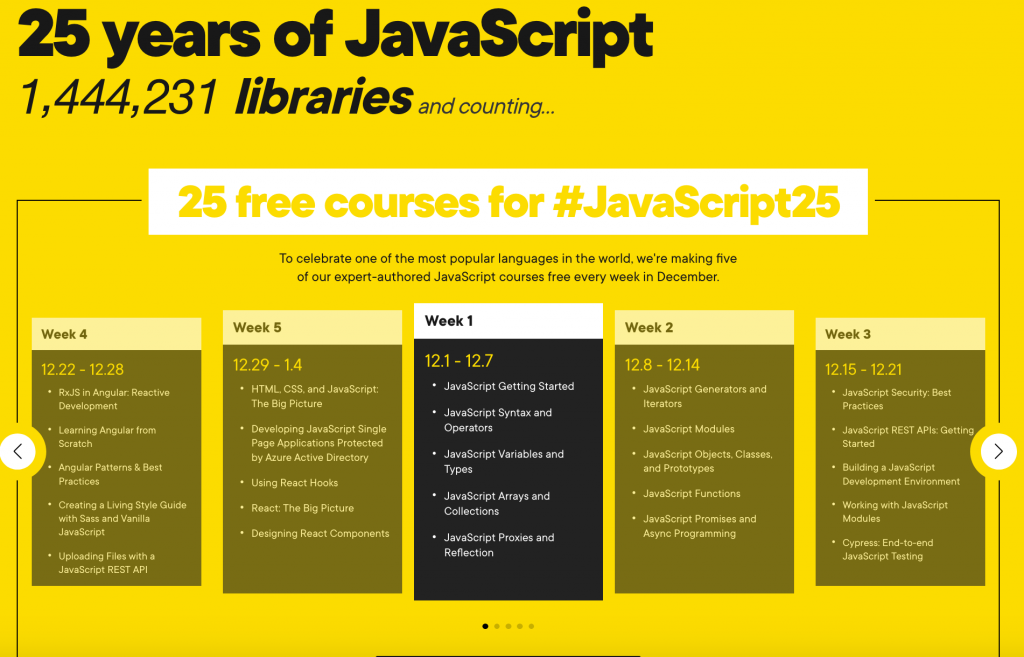 In addition to that, on the 10th of December there’ll be a live JavaScript build session with Cassidy Williams.

You can find out more by following Pluralsight on Twitter and the #JavaScript25 hashtag.