You are currently browsing the Christian Heilmann blog archives for December, 2016.

It is a strange love I have for the web. Ever since I used the web for the first time it felt like taking a ride with a best friend.

I knew I had to start working on it to never let it down again. Many people who started with the web when I did have the same idea: I feel behind the wheel and I keep wanting to show the people the world in my eyes.

But sometimes I get the feeling that we’re flying high and we’re watching the world pass us by. Every new dress the web wears comes with technical challenges showing the limits of web technology. I don’t think that is broken, it is a pain I am used to. I show people how to work around limits, how stripped down solutions will perform better in the long run, and how walking in my shoes can give them a long lasting career with some great reward.

That said, I don’t think we get the balance right. It happens all the time that things don’t go as perfect as we want them to be. Of course we can tell people that they shouldn’t have done that, and follow a sacred policy of truth about the need for, for example, ubiquituous accessibility. But people are people and in many cases it is not always easy. When the boys in the higher up departments say go and it is a question of time in the project, shortcuts are taken. You stare down the barrel of a gun of delivery and you don’t have time for sweetest perfection. And – even worse – our whole market is constantly asked to innovate and create new things. We who are telling quality stories of old don’t suffer that well.

The landscape is changing all the time and the sinner in me is OK to spread some blasphemous rumours. The bottom line is that in your room you have a lot more insight than in a cut-throat delivery cycle. When products are faulty and become hard to maintain, we shouldn’t tell people “told you so”, that’s wrong.

We should be more flexible and whilst we have and hold the web we love, we should also remember that everything counts in large amounts. So our advice should yield fast and maybe dirty results, as much as the promise of sweetest perfection and a great reward in the future.

Instead of saying it’s no good, let’s say I feel you and try to fix the fragile tension between constant growth, innovation and quality.

Posted in General | Comments Off on Enjoying the silence…

Taking a look behind the scenes before publicly dismissing something

Lately I started a new thing: watching “behind the scenes” features of movies I didn’t like. At first this happened by chance (YouTube autoplay, to be precise), but now I do it deliberately and it is fascinating.

Van Helsing to me bordered on the unwatchable, but as you can see there are a lot of reasons for that.

When doing that, one thing becomes clear: even if you don’t like something — *it was done by people*. People who had fun doing it. People who put a lot of work into it. People who — for a short period of time at least — thought they were part of something great.

That the end product us flawed or lamentable might not even be their fault. Many a good movie was ruined in the cutting room or hindered by censorship.
Hitchcock’s masterpiece Psycho almost didn’t make it to the screen because you see the flushing of a toilet. Other movies are watered down to get a rating that is more suitable for those who spend the most in cinemas: teenagers. Sometimes it is about keeping the running time of the movie to one that allows for just the right amount of ads to be shown when aired on television.

Take for example Halle Berry as Storm in X-Men. Her “What happens to a toad when it gets struck by lightning? The same thing that happens to everything else.” in her battle with Toad is generally seen as one of the cheesiest and most pointless lines:

This was a problem with cutting. Originally this is a comeback for Toad using this as his tagline throughout the movie:

However, as it turns out, that was meant to be the punch line to a running joke in the movie. Apparently, Toad had this thing that multiple times throughout the movie, he would use the line ‘Do you know what happens when a Toad…’ and whatever was relevant at the time. It was meant to happen several times throughout the movie and Storm using the line against him would have actually seemed really witty. If only we had been granted the context.

In many cases this extra knowledge doesn’t change the fact that I don’t like the movie. But it makes me feel different about it. It makes my criticism more nuanced. It makes me realise that a final product is a result of many changes and voices and power being yielded and it isn’t the fault of the actors or sometimes even the director.

And it is arrogant and hurtful of me to viciously criticise a product without knowing what went into it. It is easy to do. It is sometimes fun to do. It makes you look like someone who knows their stuff and is berating bad quality products. But it is prudent to remember that people are behind things you criticise.

Let’s take this back to the web for a moment. Yesterday I had a quick exchange on Twitter that reminded me of this approach of mine.

But it was. And it is hurtful. Right now JavaScript is hot. JavaScript is relatively easy to learn and the development environment you need for it is free and in many cases a browser is enough. This makes it a great opportunity for someone new to enter our market. Matter of fact, I know people who do exactly that right now and get paid JavaScript courses by the unemployment office to up their value in the market and find a job.

Now imagine this person seeing this exchange. Hearing a developer relations person who worked for the largest and coolest companies flat out stating that what you’re trying to get your head around right now is shit. Do you think you’ll feel empowered? I wouldn’t.

I’m not saying we can’t and shouldn’t criticise. I’m just saying knowing the context helps. And realising that being dismissive is always hurtful, especially when you have no idea how much work went into a product or an idea that you just don’t like.

There is a simple way to make this better. Ask questions. Ask why somebody did something the way they did it. And if you see that it is lack of experience or flat out wrong use of something, help them. It is pretty exciting. Often you will find that your first gut feeling of “this person is so wrong” is not correct, but that there are much more interesting problems behind the outcome. So go and look behind the scenes. Ask for context before telling people they’re doing it wrong. 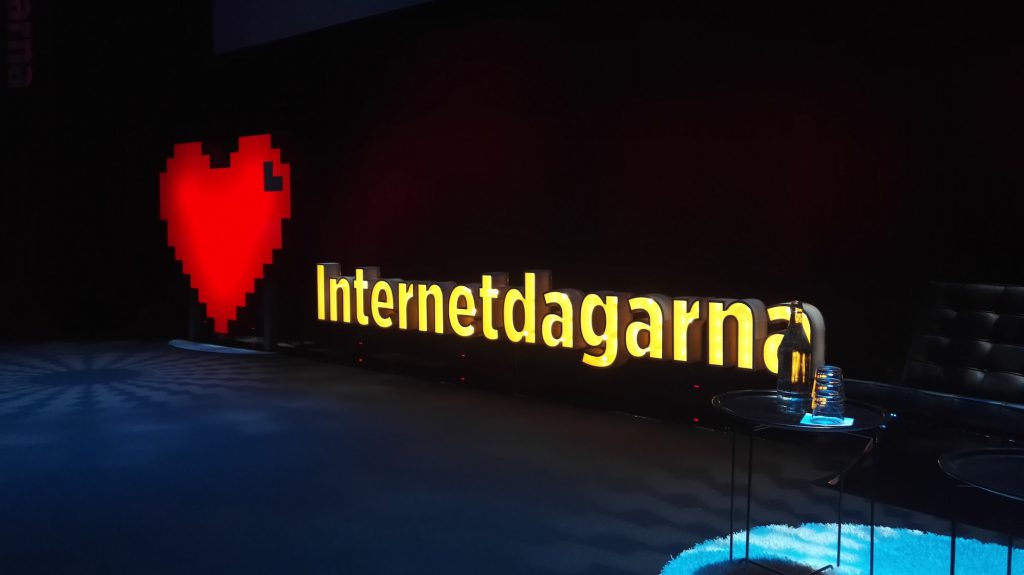 I just got back from the Internet Days conference in Stockholm, Sweden. I was flattered when I was asked to speak at this prestigious event, but I had no idea until I arrived just how much fun it would be. 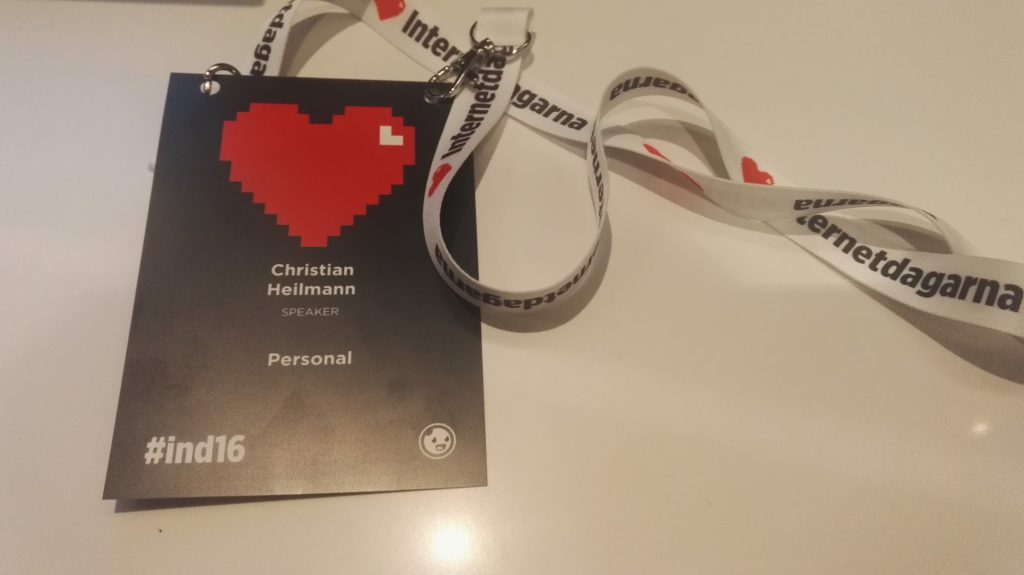 I loved the branding of he conference as it was all about pixels and love. Things we now need more of – the latter more than the former. As a presenter, I felt incredibly pampered. I had a driver pick me up at the airport (which I didn’t know, so I took the train) and I was put up in the pretty amazing Waterfront hotel connected to the convention centre of the conference. 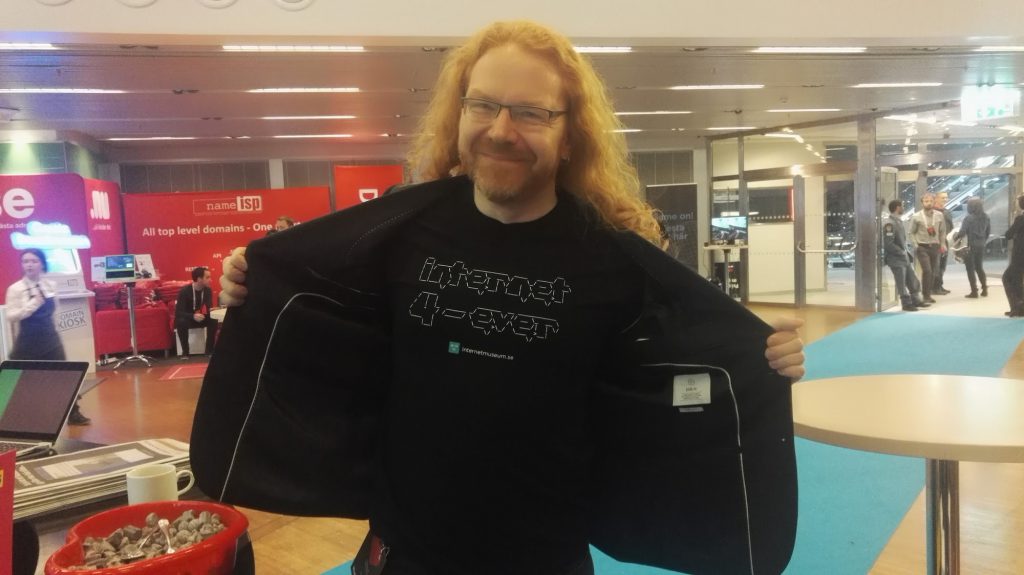 This was the first time I heard about the internet days and for those who haven’t either, I can only recommend it. Imagine a mixture of a deep technical conference on all matters internet – connectivity, technologies and programming – mixed with a TED event on current political matters.

The technology setup was breathtaking. The stage tech was flawless and all the talks were streamed and live edited (mixed with slides). Thus they became available on YouTube about an hour after you delivered them. Wonderful work, and very rewarding as a presenter.

I talked in detail about my keynote in another post, so here are the others I enjoyed:

Juliana Rotich of BRCK and Ushahidi fame talked about connectivity for the world and how this is far from being a normal thing.

Erika Baker gave a heartfelt talk about how she doesn’t feel safe about anything that is happening in the web world right now and how we need to stop seeing each other as accounts but care more about us as people.

Incidentally, this reminded me a lot of my TEDx talk in Linz about making social media more social again:

The big bang to end the first day of the conference was of course the live skype interview with Edward Snowden. In the one hour interview he covered a lot of truths about security, privacy and surveillance and he had many calls to action anyone of us can do now.

What I liked most about him was how humble he was. His whole presentation was about how it doesn’t matter what will happen to him, how it is important to remember the others that went down with him, and how he wishes for us to use the information we have now to make sure our future is not one of silence and fear.

In addition to my keynote I also took part in a panel discussion on how to inspire creativity.

The whole conference was about activism of sorts. I had lots of conversations with privacy experts of all levels: developers, network engineers, journalists and lawyers. The only thing that is a bit of an issue is that most talks outside the keynotes were in Swedish, but having lots of people to chat with about important issues made up for this.

The speaker present was a certificate that all the CO2 our travel created was off-set by the conference and an Arduino-powered robot used to teach kids. In general, the conference was about preservation and donating to good courses. There was a place where you can touch your conference pass and coins will fall into a hat describing that your check-in just meant that the organisers donated a Euro to doctors without frontiers. 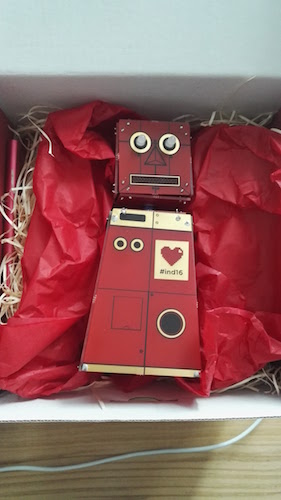 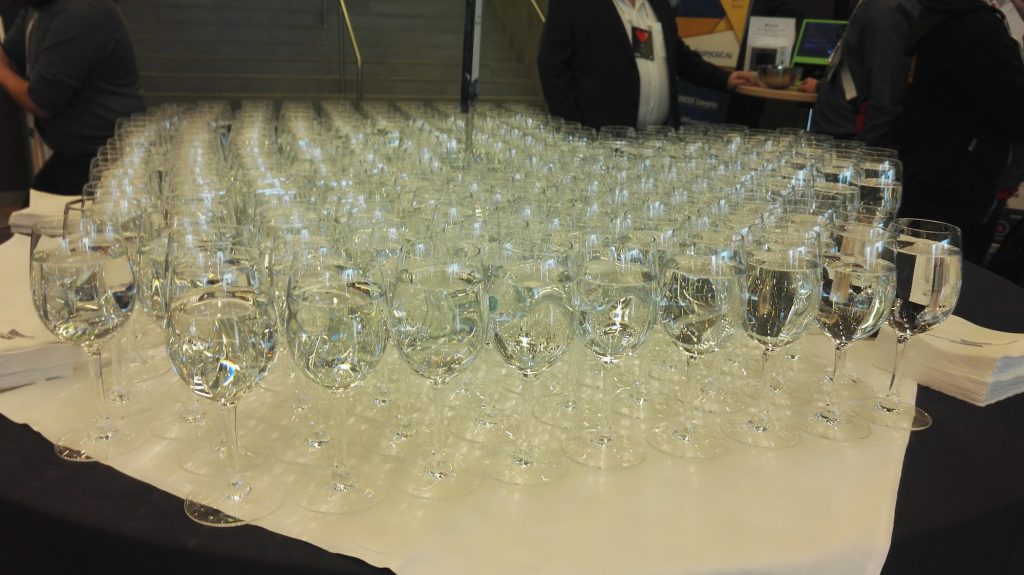 The catering was stunning and with the omission of meat CO2 friendly. Instead of giving out water bottles the drinks were glasses of water, which in Stockholm is in some cases better quality than bottled water.

I am humbled and happy that I could play my part in this great event. It gave me hope that the web isn’t just run over by trolls, privileged complainers and people who don’t care if this great gift of information exchange is being taken from us bit by bit.

Make sure to check out all the talks, it is really worth your time. Thank you to everyone involved in this wonderful event!

Posted in General | Comments Off on Pixels, Politics and P2P – Internet Days Stockholm 2016