That was Halfstack Online’s first edition (musings, and slides)

Halfstack is a series of events that are very close to my heart. They are predominantly about connections and sharing some nerdy fun. The locations are pubs and cinemas and there is a lot less pressure on presenters and audience. They aren’t a “cool crowd” event where you need to deliver “the killer talk”. Instead they are a social gathering of, well, nerds. They also end in a ridiculously hard and geeky pub quiz and some musical performance.

There’s a beautiful irreverence about them and yet they are well organised and you learn a lot. Especially letting go and playing with technology rather than trying to “be awesome”. The main organiser, Dylan Schiemann spends a lot of time and effort to make these events easy to attend and present at.

I’ve been a supporter from day one of the events as they were easy to attend when I lived in London. I already signed up for the London, Tel Aviv and others when Covid-19 hit. I am now proud owner of flight vouchers and was sad that they won’t happen. When Dylan announced the online edition of Halfstack I wondered if the cozy vibe can survive. 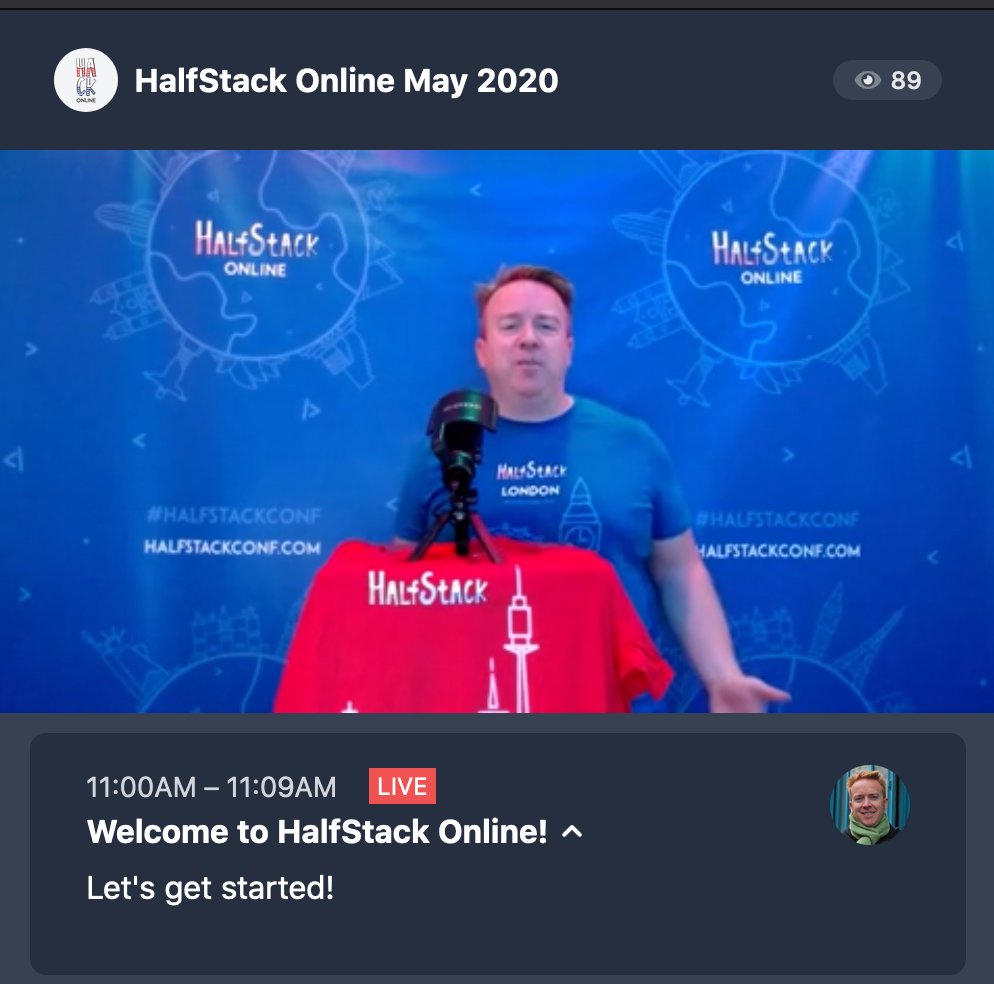 It did. Halfstack Online was a highly affordable, $19 conference with an excellent line-up. Most of the talks were pre-recorded, 30 minute presentations. This made sure that connectivity issues couldn’t ruin the party and it doesn’t get boring. After each talk there was a Skype interview with the presenter. Dylan, Jo and Tony asked prepared questions and those that people submitted in the chat during the presentations.

Dylan put a lot of effort into interspersing the presentations with breaks. There were also quite a few irreverent videos like out-takes of HalfStack conferences. All in all it gave a lovely vibe to the event and took the seriousness out of it. 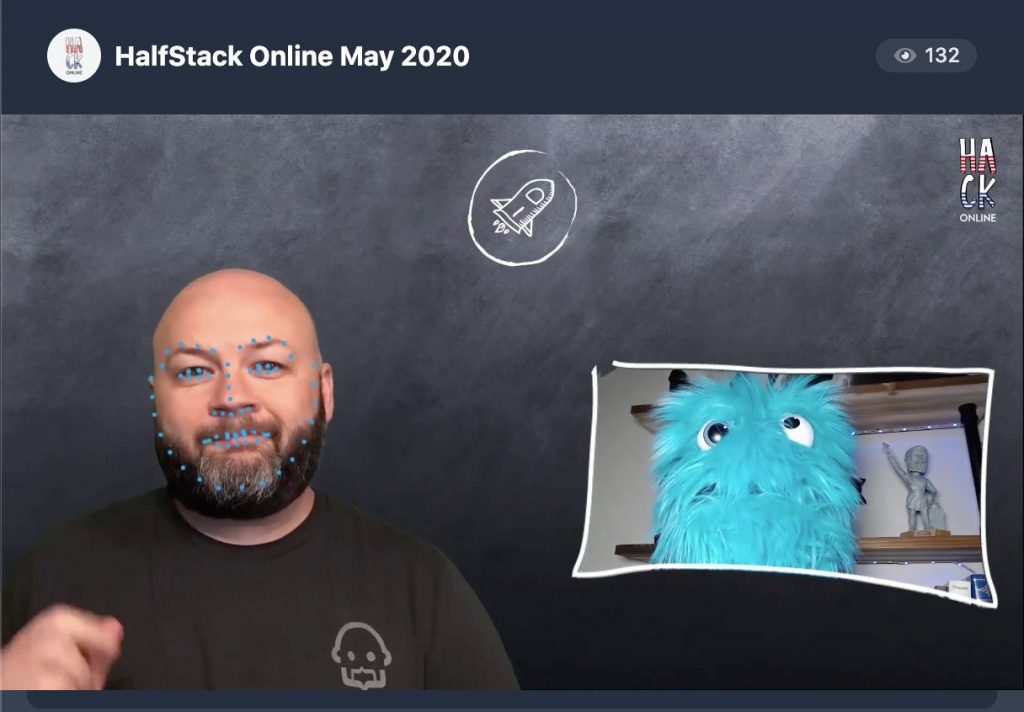 The range of talks reflected the “hey, tell us about something cool people can play with” attitude. We had talks about detecting body movement with TensorFlow and use it as a control for web products. We had in-browser face mapping to control a puppet’s movements. We had a “how to build your own weather station” talk which bravely showed the UK weather. All in all it felt more like a variety show than an event. But one where you learn a lot.

I’ve been to a lot of conferences and many do a great job of skirting the line between inspirational and educational. In Halfstack, this came naturally, as the group running it picked a wild mix. There were no ego talks, no thinly veiled product advertising, just a lot of “here is why I found this interesting, what do you think?”. The divide between presenter and attendee was very low, and I enjoyed this a lot.

It was great to see presenters I’ve seen before on stage relaxing more in a recorded talk. It was funny to be on the Skype backchannel where all the presenters hung out to see them worry about how the video might go down with the audience. There were too many to mention, but the line-up had some immensely creative and inspiring people as well as some who clearly were there to talk about something that they had fun doing. All in all it felt very accessible. There were no “heroes” there, just a bunch of people showing some work – warts and all.

The conference also acts as a fundraiser for Covid-19 related charities. With a ticket price of $19 and first-time expenses on a streaming system there won’t be a six figure donation at the end. But it still is a great thing to support.

There will be another edition of this in August and I am looking forward to see what comes next. I have a few ideas what to do, and for once I feel utterly free to choose something that is not what people expect. And that’s one of the fun bits of Halfstack.

Imagine the creativity of Reasons.to, the creative/educational mix of Beyond Tellerrand and then give it a “jam session/MTV unplugged” kind of feel and you have Halfstack. 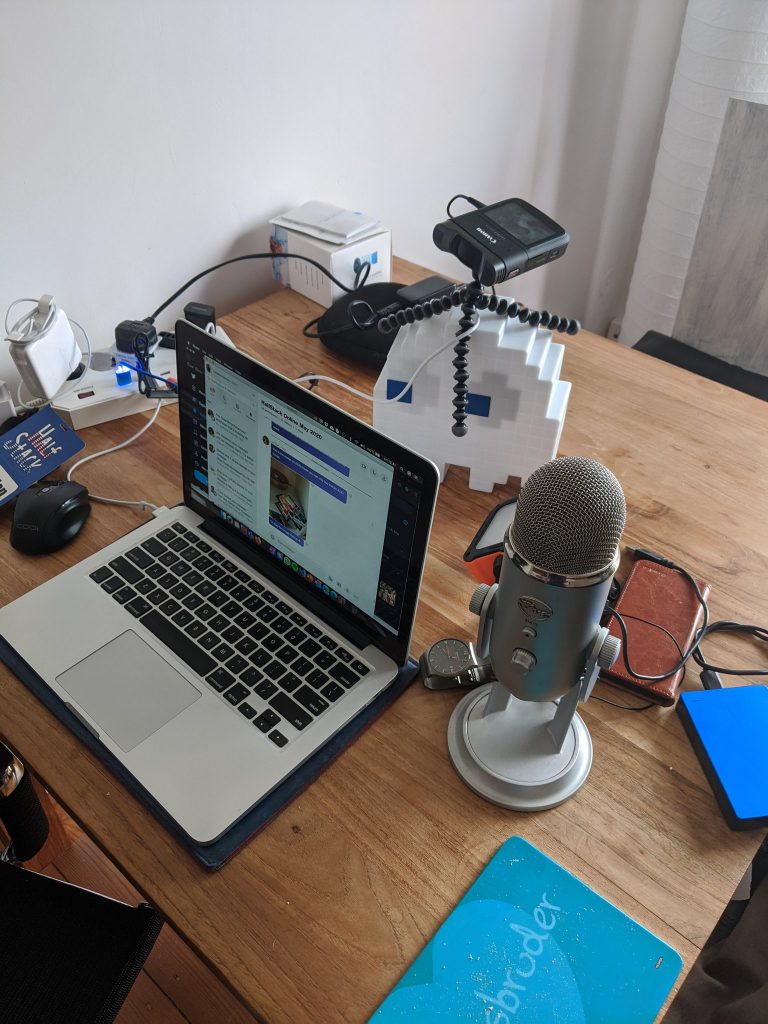 My submission this time was a talk that was a walk through the developer tools of Chromium. I showed some of the bits you may not use or never have seen but are in there. I did this more or less for myself, as I caught myself using only a small amount of what I could. I did that because of familiarity and “always having it done that way” which is not a good place to be in as a developer. And I learned a few bits along the way which hopefully inspired some people.

The slides are available on Noti.st with the resources I talked about.

View All tooled up and nowhere to go? on Notist.

The video should be available soon. Make sure to check HalfStack’s social media channels the next few weeks to see more videos cropping up. I saw most of them but also had to work, and will make sure to check some of them I missed out on.