Last week I swapped the 18 degress in Berlin with snowy rain in Newcastle, England. Why? To attend the 2018 edition of the FrontendNE conference and I am happy that I did. 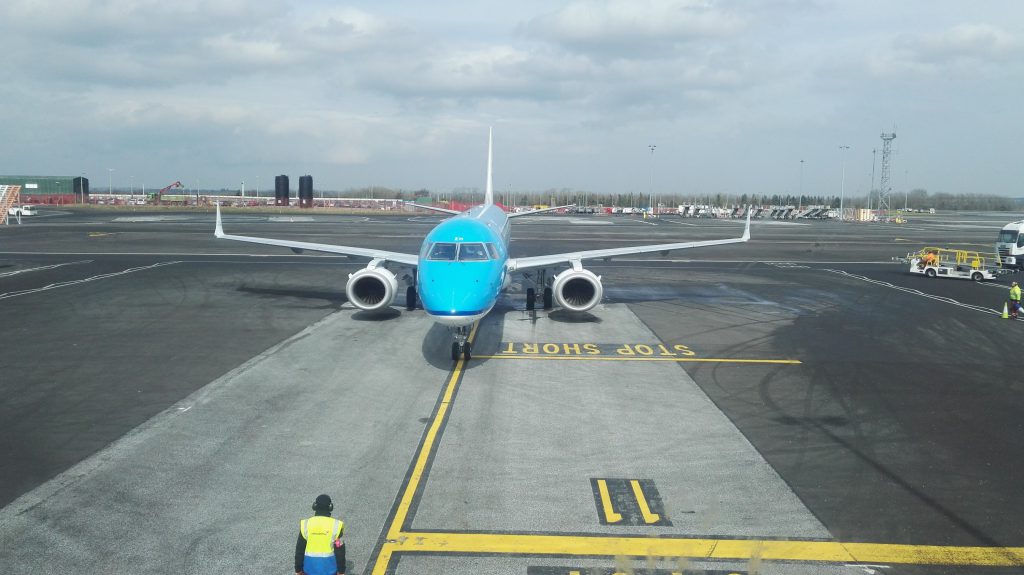 All in all this was a lovely, cozy and well-organised event. As an extra, it had an audience you don’t come across at a lot at other events. The reasons were threefold. A good location – the big hall of a brewery with proper stage audio equipment. A very affordable ticket price. And the loveliness of the organisers with a no-nonsense MC demeanour and not a hint of arrogance. 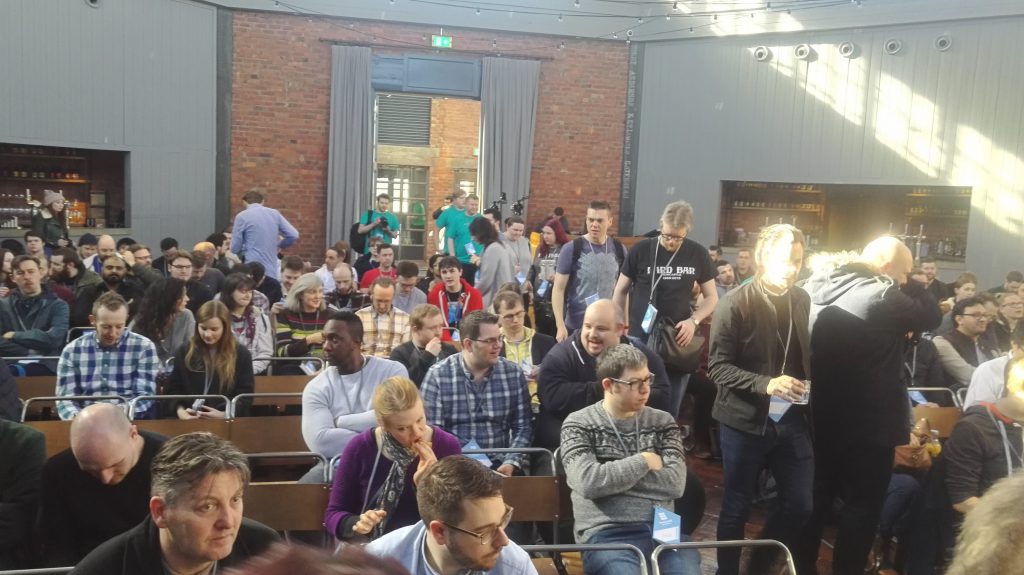 I like single-track events. It means the organisers have to work harder to ensure each slot is a winner for the audience. In this case, the line-up and topics were diverse and there was a lot to take away.

Val is a well-known authority on anything animation on the web. She has authored quite a few books and courses on the topic. And she teaches people to make things move without making your users queasy or drain the battery of their devices. In this talk she explained different techniques to animate on the web. Starting with CSS animations, past vanilla JS and up to animation libraries. This was a very pragmatic talk explaining the pros and cons of each technoloy with warts and all. Val is a very chipper and engaging speaker, and I am happy she thawed out the audience as the first to step up. Looking forward to the video.

Léonie Watson : You’re only supposed to blow the bloody doors off! 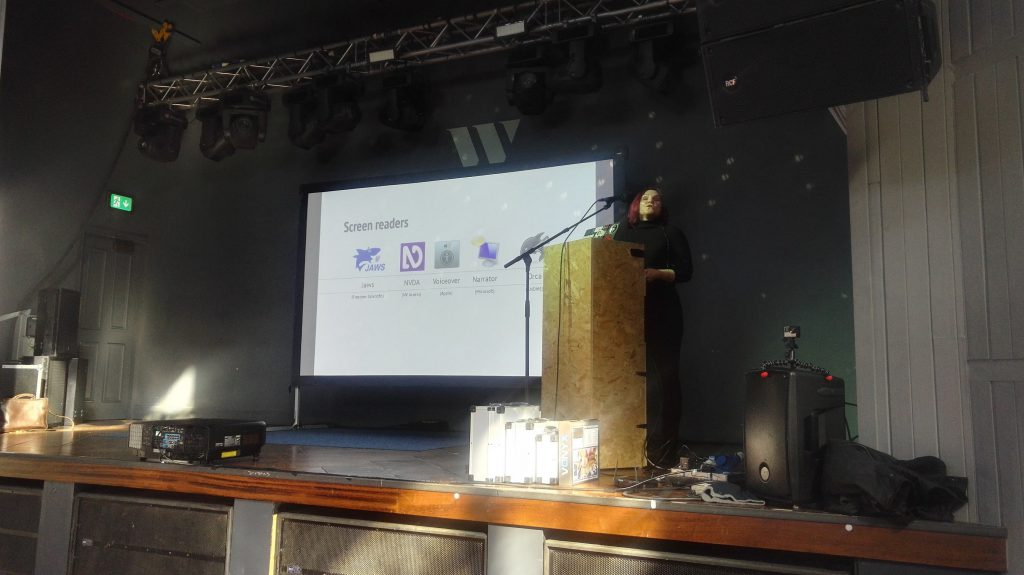 Leonie is an accessibility expert giving sensible and actionable advice on how to create accessible interfaces on the web without overshooting the mark. Yes, there is such a thing as adding too much to make your widgets accessible. Often adding a lot of ARIA also means it is your job to make it work with all kind of assistive technology. Something you can avoid by using the appropriate HTML elements and guiding the user. Hence Leonie’s talk, a nod to The Italian Job. Leonie is a superb presenter. It is great to see a visually impaired person wield stage technology and presentation software as if there is nothing much to it. I liked this talk as it fell neither into the “legal accessibility” nor the “everything works if you only use $thing” camps. Instead, Leonie showed that accessibility is like any other thing. It is a matter of looking into what you are doing and trying your best to make it work. Often this means doing less and the simple thing instead of trying to cater to needs you can’t even know about.

Jack Franklin : A red LEGO brick is always red: components on the web

Jack Franklin is a development lead at thread (the company partly responsible for my swanky style). He showed how they made it much easier to maintain and improve this product using a component approach. Web components are nothing new, of course. Making them work and perform in browsers natively is still trickly though. That’s why many component talks are about the framework du jour and opinionated. Jack did a great job not falling into this trap but showed the real benefits of components. For example hot-fixing a display issue with the certainty that you won’t affect the rest of the page. A great, no-nonsense talk about the subject, well worth a watch.

Niels Leenheer : Having fun with WebBluetooth

Oh how I rooted for this talk to work. Niels is a lovely person and oozes having fun playing with technology. That’s why it was grim to see this talk’s tech demos fail at the Halfstack conference in London earlier this year. Niels still managed to make it a good talk, but seeing him lug lots of hardware to an event just to see it all fail because of connectivity issues was grim. In essence, what Niels proves with this talk is that the specification of Bluetooth and Low-End Bluetooth is a terrible mess. And that with borderline self-flagellating reverse engineering you can do fun things with Web Bluetooth. It is a mess with a lack of standards and at times a total disregard for security. But Niels did a lovely job getting us excited anyways. Top tip though: do not fly back with him as airport security doesn’t like his suitcase full of Bluetooth marvels.

Sara Vieira : Your brain does not have a fix flag 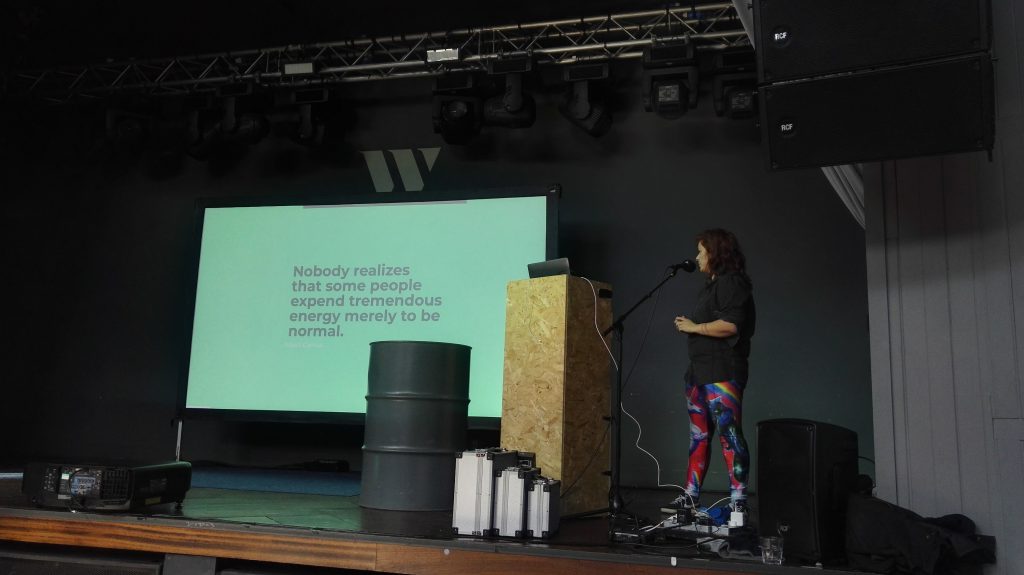 Sara’s talk was the big surprise. It wasn’t a tech talk, although she is highly capable of giving those, too. It was instead a no holes barred account of her life story dealing with and overcoming anxiety. A very important talk about a mental health issue that is tough to understand for people and hard to empathise with. I hope that the video of this will do the rounds and inspire people to care more and those affected to find the strength to find help.

I wished I had seen more of this talk, but I was bricking it as I was up next. Ian works for BuzzFeed and showed the many ways they ensure the site stays up even when everything is against you. Instead of having a “this is how to make your site performant and everything will be rosy” Ian talked shop. CDNs not working like you expect them, data feeds timing out, the whole horror show of network connectivity. I’m looking forward to seeing this.

Chris Heilmann : 7 things you can do to become a happier JavaScript developer

Hated it. Knew all the content. Boring. Also, what’s with that accent?

Everything worked nicely and people were very well fed and watered. Actually there was a lot of yummy food left over, which was a shame. The timing worked out, the breaks were well-timed. The location was gorgeous with a lovely park outside full of dogs and swans and their interplay.

The after-party was at a location that had pool billiards, minigolf, bowling and many other things. The food was plenty, two vouchers for drinks ensured that people got merry and charming and not annoying. I only used the bowling lane as I had a lot of people come up to me and ask me questions. I heard from witnesses that parts of the sounds in the karaoke room violated the Geneva convention but that may have been hearsay (or what’s left of the hearing).

The self-demeaning jokes of the organisers on stage, “turns out using sketch for print wasn’t the best idea, just imagine those missing letters” showed that this event was a labour of love and not a way to make money. I like when an event outside the usual spaces for events works out that well. I have the same fondness for Beyond Tellerand, as Duesseldorf isn’t a hub of web news either. I am very happy to have contributed to this event in Newcastle and hope that more will come soon.