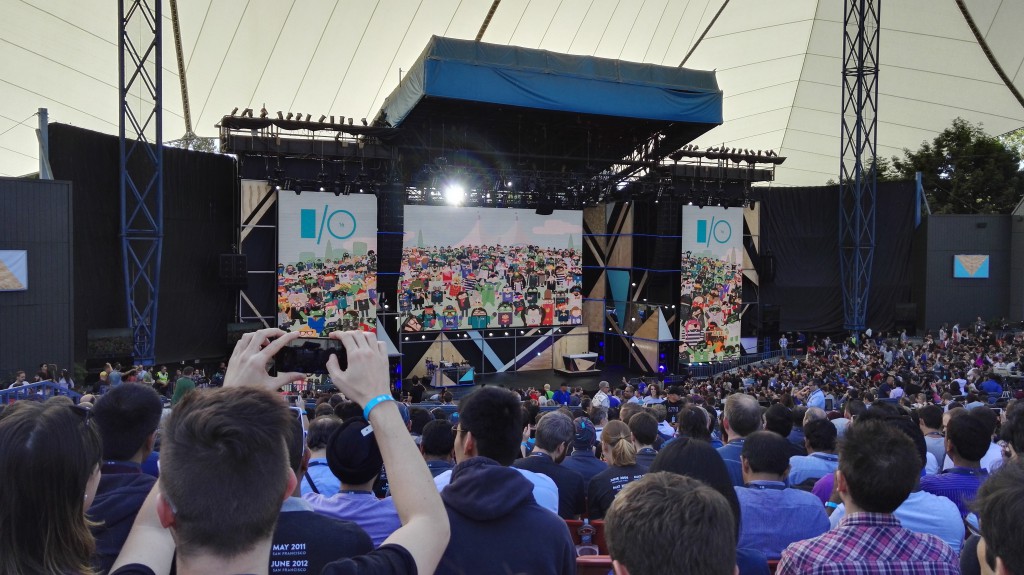 Disclaimer: The following are my personal views and experiences at this year’s Google IO. They are not representative of my employer. Should you want to quote me, please do so as Chris Heilmann, developer.

TL;DR: Is Google IO worth the $900? Yes, if you’re up for networking, getting information from experts and enjoy social gatherings. No, if you expect to be able to see talks. You’re better off watching them from home. The live streaming and recordings are excellent.

Google IO this year left me confused and disappointed. I found a massive gap between the official messaging and the tech on display. I’m underwhelmed with the keynote and the media outreach. The much more interesting work in the breakout sessions, talks and demos excited me. It seems to me that what Google wants to promote and the media to pick up is different to what its engineers showed. That’s OK, but it feels like sales stepping on a developer conference turf.

I enjoyed the messaging of the developer outreach and product owner team in the talks and demos. At times I was wondering if I was at a Google or a Mozilla event. The web and its technologies were front and centre. And there was a total lack of “our product $X leads the way” vibes.

Kudos to everyone involved. The messaging about progressive Web Apps, AMP and even the new Android Instant Apps was honest. It points to a drive in Google to return to the web for good. 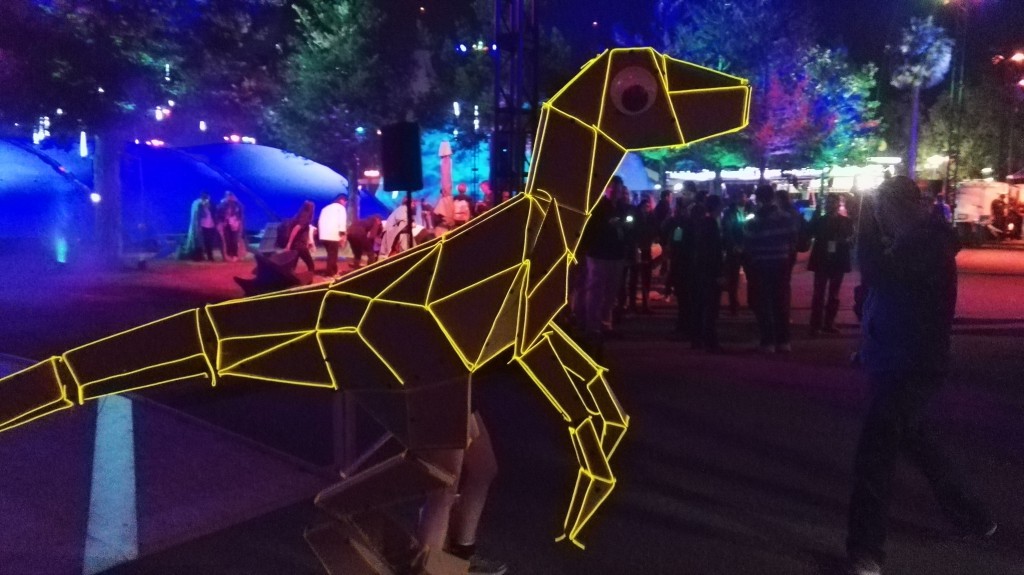 The vibe of the event changed a lot since moving out of Moscone Center in San Francisco. Running it on Google’s homestead in Mountain View made the whole show feel more like a music festival than a tech event. It must have been fun for the presenters to stand on the same stage they went to see bands at.

Having smaller tents for the different product and technology groups was great. It invited much more communication than booths. I saw a lot of neat demos. Having experts at hand to talk with about technologies I wanted to learn about was great. 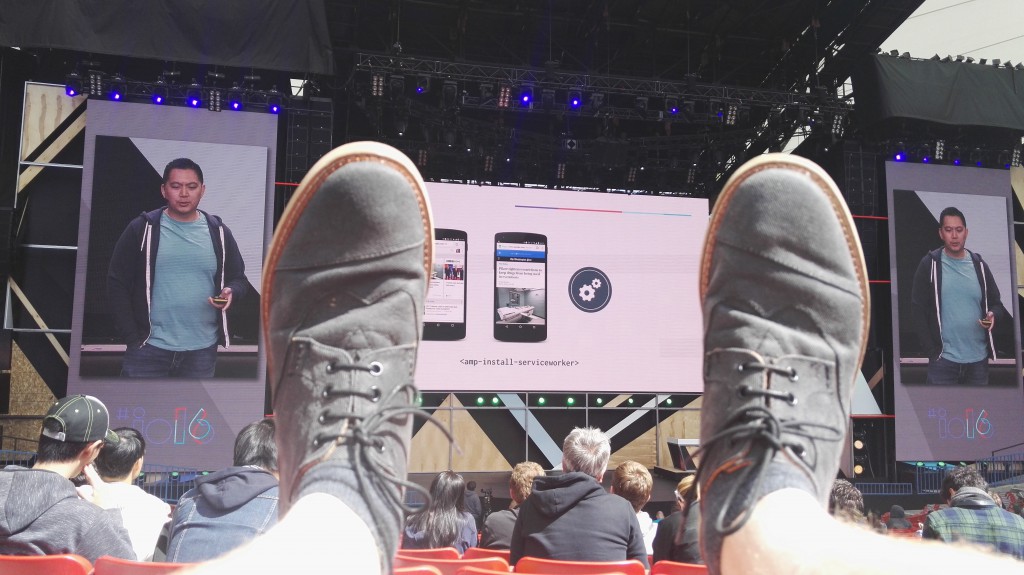 Here are the good and bad things about the organisation:

Apart from the terrible crowd control, two things let me down the most. The keynote and a total lack of hardware giveaway – something that might actually be related.

Don’t get me wrong, I found the showering of attendees with hardware excessive at the first few IOs. But announcing something like a massive move into VR with Daydream and Tango without giving developers something to test it on is assuming a lot. Nine hundred dollars plus flying to the US and spending a lot of money on accommodation is a lot for many attendees. Getting something amazing to bring back would be a nice “Hey, thanks”.

There was no announcement at the keynote about anything physical except for some vague “this will be soon available” products. This might be the reason.

My personal translation of the keynote is the following:

We are Google, we lead in machine learning, cloud technology and data insights. Here are a few products that may soon come out that play catch-up with our competition. We advocate diversity and try to make people understand that the world is bigger than the Silicon Valley. That’s why we solve issues that aren’t a problem but annoyances for the rich. All the things we’re showing here are solving issues of people who live in huge houses, have awesome cars and suffer from the terrible ordeal of having to answer text messages using their own writing skills. Wouldn’t it be better if a computer did that for you? Why go and wake up your children with a kiss using the time you won by becoming more effective with our products when you can tell Google to do that for you? Without the kiss that is – for now.

As I put it during the event:

I actually feel poor looking at the #io16 keynote. We have lots of global problems technology can help with. This is pure consumerism.

I stand by this. Hardly anything in the keynote excited me as a developer. Or even as a well-off professional who lives in a city where public transport is a given. The announcement of Instant Apps, the Firebase bits and the new features of Android Studio are exciting. But it all got lost in an avalanche of “Look what’s coming soon!” product announcements without the developer angle. We want to look under the hood. We want to add to the experience and we want to understand how things work. This is how developer events work. Google Home has some awesome features. Where are the APIs for that?

As far as I understand it, there was a glitch in the presentation. But the part where a developer in Turkey used his skills to help the Syrian refugee crisis was borderline insulting. There was no information what the app did, who benefited from it and what it ran on. No information how the data got in and how the data was going to the people who help the refugees. The same goes for using machine learning to help with the issue of blindness. Both were teasers without any meat and felt like “Well, we’re also doing good, so here you go”.

Let me make this clear: I am not criticising the work of any Google engineer, product owner or other worker here. All these things are well done and I am excited about the prospects. I find it disappointing that the keynote was a sales pitch. It did not pay respect to this work and failed to show the workings rather than the final product. IO is advertised as a developer conference, not a end user oriented sales show. It felt disconnected.

Things that made me happy 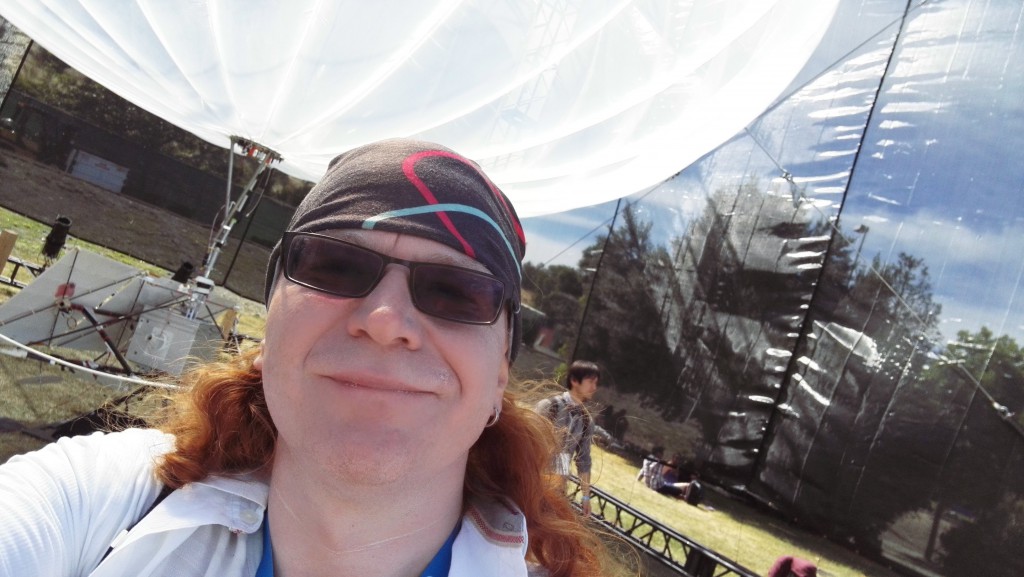 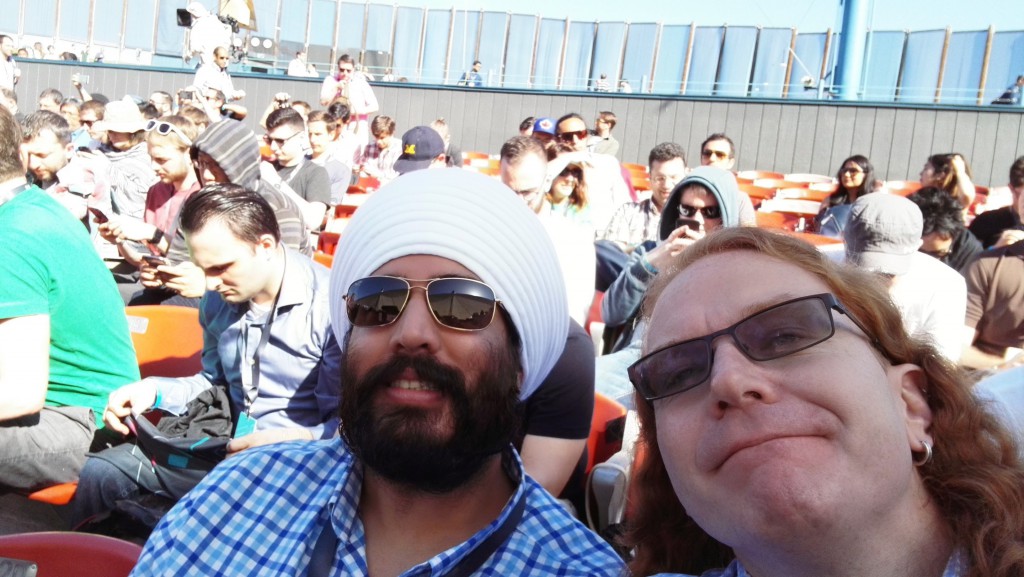 I will go again to Google IO, to talk, to meet, to see product demos and to have people at hand that can give me insight further than the official documentation. I am likely to not get up early next time to see the keynote though and I would love to see a better handle on the crowd control. It is frustrating to queue and not being able to see talks at the conference of a company who prides itself at organising huge datasets and having self-driving cars.
Here are a few things that could make this better:

I look forward to interacting and working with the tech Google. I am confused about the Google that tries to be in the hands of end users without me being able to crack the product open and learn from how it is done.