Why Microsoft matters more than we think

I’m guilty of it myself, and I see it a lot: making fun of Microsoft in a presentation. Sure, it is easy to do, gets a laugh every time but it is also a cheap shot and – maybe – more destructive to our goals than we think. 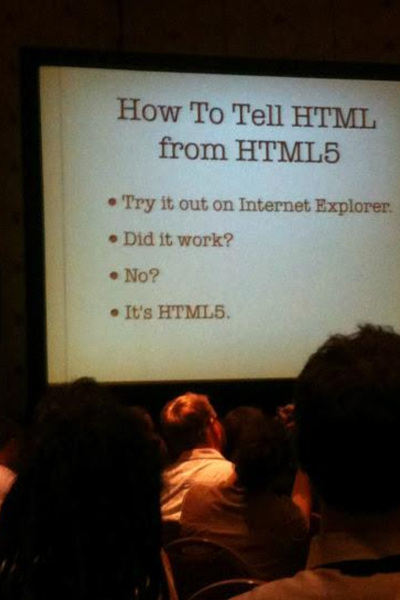 Let’s recap a bit. Traditionally Microsoft has not played nice. It destroyed other companies, it kept things closed that open source could have benefited from and it tried to force a monoculture onto something that was born open and free: the web.

As standard conscious web developers, IE with its much slower adaption rate of newer versions was always the bane of our existence. It just is not a simple thing to upgrade a browser when it is an integral part of the operating system. This is exacerbated by the fact that newer versions of Windows just weren’t exciting or meant that a company would have to spend a lot of money buying new software and hardware and re-educate a lot of people. A massive investment for a company that wasn’t worth it just to stop the web design department from whining.

Replacing IE also turned out to be less easy than we thought as the “this browser is better” just didn’t work when the internal tools you use are broken in them. Chrome Frame was an incredible feat of engineering and – despite being possible to roll out on server level even – had the adoption rate of Halal Kebabs at a Vegan festival.

Marketing is marketing. Don’t try to understand it

It seems also fair to poke fun at Microsoft when you see that some of their marketing at times is painful. Bashing your competition is to me never a clever idea and neither is building shops that look almost exactly the same as your main competitor next to theirs. You either appear desperate or grumpy.

Other things they do

The thing though is that if you look closely and you admit to yourself that what we call our community is a tiny part of the overall market, then Microsoft has a massive part to play to do good in our world. And they are not cocky any longer, they are repentant. Not all departments, not all people, and it will be easy to find examples, but as a whole I get a good vibe from them, without being all marketing driven.

Take a look at the great tools provided at Modern.ie to allow you to test across browsers. Take a look at status.modern.ie which – finally – gives you a clear insight as to what new technology IE is supporting or the team is working on. Notice especially that this is not only for Explorer – if you expand the sections you get an up-to-date cross-browser support chart linked to the bugs in their trackers.

This is a lot of effort, and together with caniuse.com makes it easier for people to make decisions whether looking into a technology is already worth-while or not.

And this to me is the main point why Microsoft matters. They are the only ones that really reach the “dark matter” developers they created in the past. The ones that don’t read hacker news every morning and jump on every new experimental technology. The ones that are afraid of using newer features of the web as it might break their products. The ones that have a job to do and don’t see the web as a passion and a place to discuss, discard, hype and promote and troll about new technologies. And also the ones who build the products millions of people use every day to do their non-technology related jobs. The booking systems, the CRM systems, the fiscal data tools, all the “boring” things that really run our lives.

We can moan and complain about all our great new innovations taking too long to be adopted. Or we could be open to feeding the people who talk to those who are afraid to try new things with the information they need.

Let’s send some love and data

I see Microsoft not as the evil empire any longer. I see them as a clearing house to graduate experimental cool web technology into something that is used in the whole market. Chances are that people who use Microsoft technologies are also audited and have to adhere to standard procedures. There is no space for wild technology goose chases there. Of course, you could see this as fundamentally broken – and I do to a degree as well – but you can’t deny that these practices exist. And that they are not going to go away any time soon.

With this in mind, I’d rather have Microsoft as a partner in crime with an open sympathetic ear than someone who doesn’t bother playing with experimental open technology of competitors because these don’t show any respect to begin with.

If we want IT to innovate and embrace new technologies and make them industrial strength we need an ally on the inside. That can be Microsoft.