Update: The full video of my talk is now available: 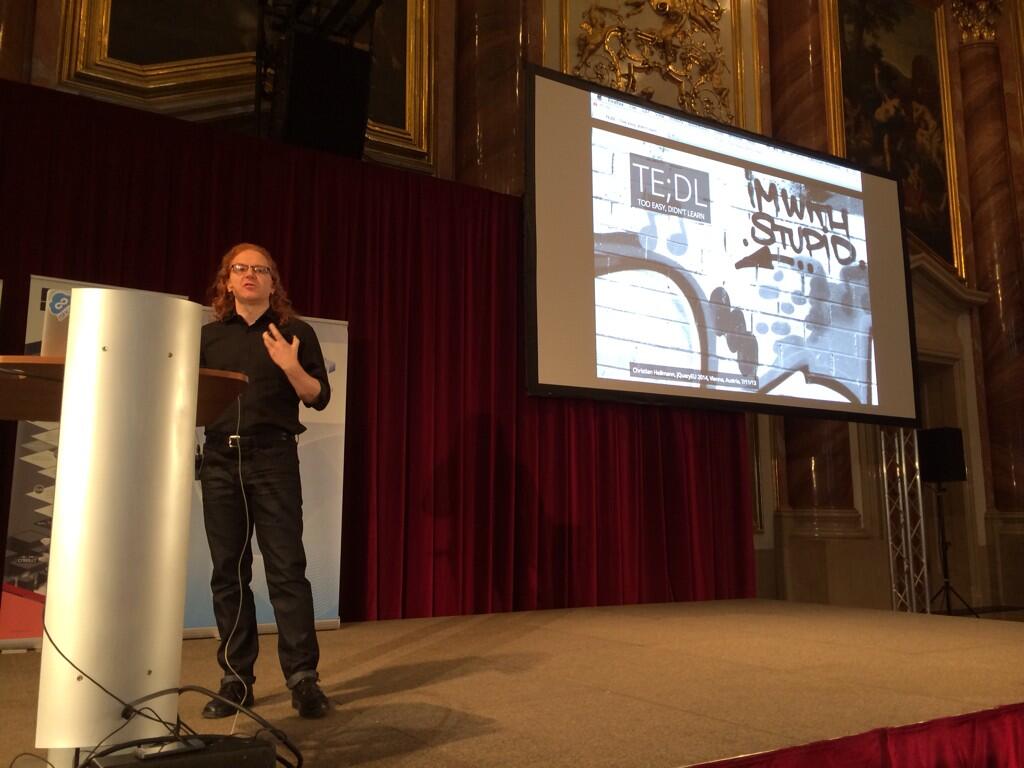 I am right now on the plane back to England after my quick stint at Vienna giving the keynote at jQuery Europe 2014. True to my ongoing task to challenge myself as a speaker (and as announced here before) I made a bit of a bet by giving a talk that is not in itself technical, but analytical of what we do as developers. The talk was filmed and if you can’t wait, I made the slides available and recorded a screencast (with low sound, sorry).

There is also a audio recording on SoundCloud and on archive.org.

In the keynote, I tried to analyse the massive discrepancy between what we as web developers get and how happy we seem to be.

We are an elite group in the job market: we are paid well, our work environment is high-tech and our perks make other people jealous. We even get the proverbial free lunches.

And yet our image is that of unsatisfied, hard to work with people who need to be kept happy and are socially awkward. I was confused that a group with all the necessary creature comforts is not an example of how easy working together could be. Instead, we even seem to need codes of conduct for our events to remind people not to behave badly towards people of the other sex or cultural background. Are we spoiled? Are we just broken? Or is there more?

I’ve found a few reasons why we can come across as unsatisfied and hard to handle and the biggest to me was that whilst we are getting pampered, we lack real recognition for what we do.

When you get a lot, but you yourself feel you are not really doing much, you are stuck between feeling superior to others who struggle with things you consider easy and feeling like a fraud. Instead of trying to communicate out about what we do, how much work it involves and why we do things in a certain way we seem to flee into a world of blaming our tools and trying to impress one another.

I am very happy to report that the feedback I got at the event was very good. I had some criticism, which is great as it gives me something to think about. And I had some heartfelt remarks from people who said I’ve opened their eyes a bit as to why they behaved in a certain way and now know how to fix some issues and clashes they had.

I don’t want to repeat it all here again – if wanted, I could write a larger article on the subject to be published somewhere with more eyeballs. Simply listen to the recording or wait for the video to be released.

I couldn’t have done this without watching some other talks and reading some other posts, so here are links to the materials used:

I want to thank the audience of jQuery Europe for listening and being open to something different. I also want to thank the organisers for taking the chance (and setting the speakers up in the most epic hotel I ever stayed in). I also want to point out that another talk at jQuery Europe 2014 – “A Web Beyond Touch” by Petro Salema was one of the most amazing first stage performances by a speaker I have seen. So keep your eyes open for this video.